FavorCoins (Coins4Favors) is proclaimed DOA by the team due to lack of interest.

Traceto.Io CEO: We Expect The Nexus Between KYC And Credit Risk In The Blockchain Industry from June 30

Coins4Favors (C4F) was a marketplace project that aimed to monetize micro-tasks that were too small to be monetized before blockchains with cheap transactions were invented. The payments on the C4F network were meant to be facilitated via the FavorCoins on the ETH blockchain. The base of the project was an app with GPS location matching so that for instance people could hire someone to hold them a parking spot on a certain street. It was meant to be an extension to the gig economy.

I believe that every human mind feels pleasure in doing good to another. #ThomasJefferson Use #Coins4Favors to do small favors for others or have them done for you. #sharingeconomy https://t.co/nl7YLI54ZH pic.twitter.com/Cb59eDYuIF

Noticing the official Twitter account did not see a new post in about a month while the ICO is ongoing and set to continue until late July 2018, we reached out to the team through the official Telegram group.

The group admin promptly responded that they have not seen many investors, at the current rate the soft cap will not be met and they will return ETH to their investors. 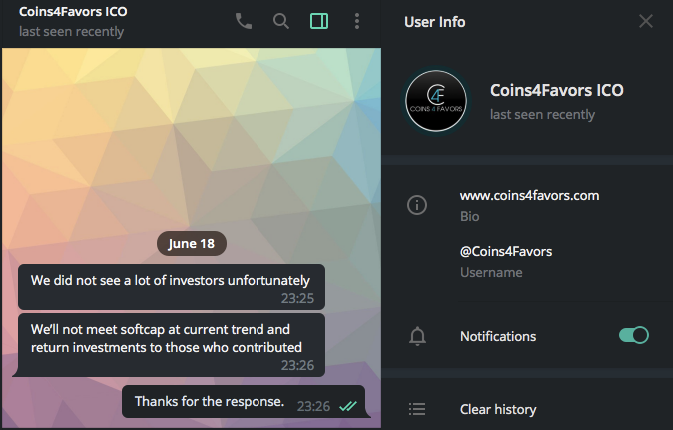 FavorCoin token on EtherScan, you see there haven’t been any movements for about a month.

Members of the C4F team on LinkedIn:

Below a copy of the whitepaper hosted on our server for your future reference. This does not appear to be an exit scam, rather a sound project that relied on a retail support that wasn’t there just yet. We are watching closely whether investments will indeed be returned though.

Documents archived for this token:

JMT under the Twitter handle @tradingfanbois has been deep in bitcoin markets since late 2014. It is the person who takes care of the office of AltcoinTrading.NET. Also answering your Quora questions regarding Bitcoin, cryptocurrencies and technical analysis.