Should we fear the deflationary nature of cryptocurrencies?

You are reading about: "Should we fear the deflationary nature of cryptocurrencies?"

Should we fear it?

Does deflation break the function of a currency as medium of exchange?

Inflation vs Deflation: The Oversimplified Argument

The mainstream argument goes that stable, positive values of inflation are beneficial for the business side of humanity. If prices of consumer goods keep growing thanks to inflation, people buy as soon as they can. If the purchasing power of cash keeps growing thanks to deflation, people stop buying stuff and commerce starts collapsing. Therefore, if Bitcoin were the default currency for payments, the deflation it would bring about would result in a collapse.

The Economist published an article about the problem a few years back. It highlighted it as an oversimplification to see inflation vs deflation only as different developments of consumer goods prices.

The Economist explains, the main problem is not about prices and buying power of the common citizen at all. They assert that buying decisions shift and turn either way, they are influenced by more complex matters than how much a product costs.

As a Redditor puts it: When one is very hungry, a cheeseburger today can be worth more than two cheeseburgers tomorrow.

The same logic applies to a computer that you need to buy now, not in a year, perhaps because you are going to take up a graphic design side kick. After a year, you will end up with more money than if you waited to buy the same computer at a better price.

The key point of inflationary policies is not prices of consumer goods, but debt: With an inflation rate that keeps slowly growing, any money you owe is declining in real value, along with all money in general.

You owe the same amount of a currency but that amount buys less and less over time. After a long enough period of time, the debt can be considered effectively zero.

It is worth noting once again that for this to work, the inflation needs to keep growing rather than just be positive. Even if the inflation is positive but declining, borrowers still end up owing more than they were counting with.

The Economist ends the article on a speculative note: “But in a few decades, the problem may disappear: in a cashless economy it is impossible to stash money under the bed. That would allow nominal interest rates to go negative, as everyone’s bank balance could simply be reduced simultaneously.”

The surge in popularity of cryptocurrencies has obviously shaken this expectation to its core.

Bitcoin is not deflationary by nature, only in effect 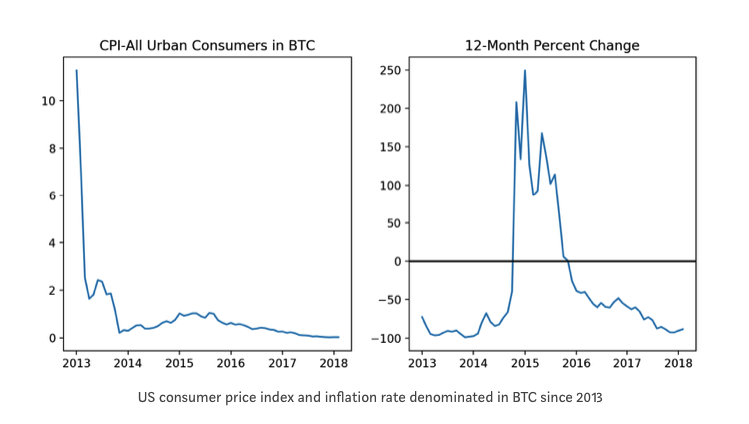 To clear a possible misconception, cryptocurrencies like Bitcoin are not deflationary by design.

In 2018 there are still new Bitcoins created with every block mined. This system will carry on for some time now before all 21 million Bitcoins have been mined. Afterwards, Satoshi Nakamoto proposed the system will be able to run solely on transaction fees.

However, if you denominate the consumer spending basket in BTC, you will see that in effect Bitcoin has deflationary properties.

What is more practically important is the fact that giving the volatility of Bitcoin, the real inflation rate is unpredictable.

Once again, this is more of a problem for a business that relies on credit. Not so much for a savvy individual who minds his own decisions.

The change is not in the system

Current economic model sees your monthly spending budget as a monolithic bulk of money you will splurge on anything without thinking too much about it. Unless you live under a rock, you will agree this model is not completely unreasonable.

When you look at your money in a more granular way though, you will see that having deflationary currency (deflationary at lest for a time) would not harm you at all:

Focused spending would really not be a problem. You would always spend enough to survive and luckily, the rest would meanwhile grow in buying power.

The main point here is at the same time a roadblock and an opportunity: The mindless splurging model lies on thin ice because change is always one decision away, but this deal-breaking decision can only be made by a person who accepts risk. Particularly in decentralized deflationary system, being wrong would have consequences.

Our culture has shifted very much away from this risk, though. In the current framework, it is better to ride your mistakes all the way to the ground.

The alternative system would require you to cut your losses short.

Focused spending: It has happened before

The way it is, change can only come on large scale when it is truly needed, because the old ways are just not cutting it anymore.

Fortunately, in this day and age disruptive changes happen all the time.

With the consumers’ fragmented attention divided among their several trusted social media channels and digital news sources, the idea of focused spending is not very far away.

The shift to focus also started with a commercial edge, it was the concept of laser-like targeting that was beyond the search advertising boom we saw in the past decade.

In 2018, we give Google and Facebook so much of our personal data that they are now able to target display advertising just as well, and the edge of search is waning. But in its beginnings, the difference was major: Either you were showing a banner to an undifferentiated mass of people only to get your brand logo in front of their eyes, or you were showing advertisement on a Google search page to people who were actually looking for a product like yours.

Google recently reported that the average consumer started spending a lot of time researching which retail product to buy. All of a sudden, aspects like composition, land of origin and workmanship started being important.

On a similar note, professionals in industries like fitness, beauty or media are reporting the way to earn living has changed.

Two decades ago you would get a sponsor who would pay you for exposure of their brand asset. But today, this unfocused PR is much less effective than back in the 90s when everyone had to keep watching the same talking heads on TV over and over and over. Nowadays the customer got used to seeing product placements everywhere and started also judging value. After all, nobody needs to stay with any specific product. It is easy to find out about the alternatives.

It seems we are getting bored of being bored. Will we also get bored of our life decisions being shielded by a predictable top-down system?